We are in competing mode at the moment having held two competitions in the last month. First we had the Evaluation competition in which Paul Brennan’s target speech was evaluated by four contestants. The winner was Sam Warner who will go on to the Area competition later in the year. 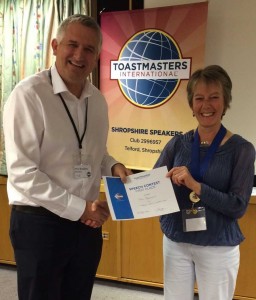 This week we held a Table Topics competition in which six contestants took part. This was a tough challenge as each competitor had literally a few seconds to begin speaking for 1-2 minutes on a subject they had just been given. In this case the question was ‘Tell us about the worst film you have ever seen and why we should all go and see it’.

The winner was Phil Bradley with an entertaining account of his experience as a film extra in Iron Eagle 2 in Israel. Phil will be representing our club at the Area Competition on 4 October. In second place was Steve Burrows and Paul Brennan was third.

This entry was posted in Competitions. Bookmark the permalink.