A double win and runner-up 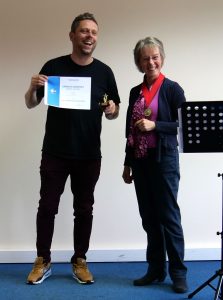 Toastmaster Kyle Heath has made club history by becoming the first member of Shropshire Speakers to win a double placement in three successive speech contests. His entry in the Humorous Speech contest ‘Breaking the parents’ code’ took him to first place in the club contest in August, along with winning the Table Topics contest.

His next challenge was to compete in the Area 39 contest in October against the best speakers from the three other clubs. Speaking outside your own club is a different experience with new faces in the audience and your fellow competitors an unknown quantity. Kyle won the Table Topics contest and was runner-up in the Humorous Speech contest. As the first and second placed winners went through to the next level, Kyle duly marked 3 November in his calendar and renewed his speech rehearsals. 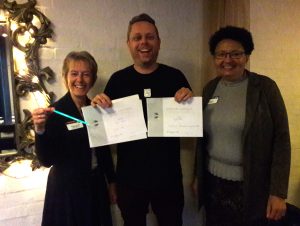 The Division E speech contests were held in Warwick on 3 November and attended by over 40 Toastmasters from across the East and West Midlands. The competition was tough with the six best speakers who had made it through their club and area contests vying for a place in the District 71 final next May. On this occasion, only the winner of each contest would go on to the District final. Kyle put on his best performance yet of his humorous speech and did a great table topic about his love of skateboarding. We were delighted when Kyle was declared the runner-up in both the Humorous Speech and Table Topics contests, beating four of the other contestants. Jenny and Jill were there to support Kyle who should be very proud of his achievement.