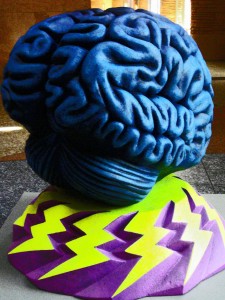 Rebecca Evison kicked off the evening with an assertive banging of the gavel that even the hotel residents in the bar could not fail to stand to attention. Rebecca also took on the role of grammarian and Ah counter, Liz McCourt was Toastmaster, Jill Ming was General Evaluator, John Davies was Time keeper, Phil Bradley was Warm up and Matt Hegarty was Table topics master.

Eddie Leaper entertained and intrigued the audience by reconstructing what could go wrong with emails by simulating passing papers representing emails in the audience to end up being delivered to John. This lead John to be dismayed to find the intended money he was expecting to receive by mail had been hacked into on route and he was left with not even enough to buy Old Kent Road in Monoploy.

Phil Bradley claimed to have temporarily lost his inspiration and found it again through the Simon Sinek’s model of why, how and what. It all changed for the better when he started with asking the question why  and looking at things inside out.

Steve Burrows informed us about the alpha brain waves and explained this day dream mode is how we can safely drive to work and realise we have no recollection of the journey.  Refreshing to hear that previously referred to as a senior moment is in fact due to the amount of data we have stored in our brains and trying to locate where we have stored it.

This entry was posted in Blog, Speeches and tagged publicspeaking. Bookmark the permalink.